We had hoped that we’d get one more week out of the mulberry grove, but the sudden hot spell  vanquished all hope there. All the berries fell off on Sunday and the local bird/rabbit/squirrel population are having a berry fest field day. Best mulberries ever, this was a good season for us, as many years we’ve only gotten a week or two out of the grove. Next year, it will be even better as we learned a thing or two about mulberry management. We also discovered that rattlesnakes like to hang out in that part of the farm, and so next year us harvesters will be “chapped up” with rattlesnake protection, at least in the early weeks of picking when the snakes have gotten accustomed to having the grove to themselves.

Below is this week’s large Garden N Grove box

For whatever random reason, you now have to click on the image to view the entire thing. 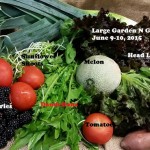