Skip to the content
Because the first well driller didn’t drill when he said he was going to, I had to pass up this years’ annaul bare root purchases, usually made in December. They can be made much earlier, but the dead, dead line is mid December. After that, you can buy bare root in a local nursery, but not at wholesale or quantity pricing. With so much up in the air, I had to forgo my usual shopping trip through suppliers’ catalogs. But when Paul told us we’d hit water, I did make a couple desparate calls, and got to squeeze in a few additions. Most of what I’d like is unavailable, but got a few items. We’re adding 100 raspberry plants (300 row feet), 100 or so row feet of Rhubarb, and 200 heirloom Sweet Purple Asparagus plants. We’re adding a few blackberries, some apples (most were unavailable), plums, chocolate persimmon, a few pears and maybe some jujubees. There’s also an unusual pomegranate that is seedless, and I’ll trial that.
Subtropical additions that I don’t buy bareroot, like passionfruit, sapote, dragon fruit, blood oranges, Pakistani sweet lemon and Pakistani mulberry can wait until later in the season.
After the December, 2007 notice from Rainbow Water District telling us that since Morning Song Farm is an “Agricultural Discount” customer, they’re taking the fine print option of putting us on a mandatory 30% water use reduction, we decided to go for broke and drill for water. Amid the cinders of the October fire loss, Farmer Donna takes a quick look at her P&L for the year, and comes to the obvious conclusion that the farm couldn’t possibly continue to operate at all without an alternative water source. There’s just no way we could cut our production 30%, and continue a farming operation. The farm isn’t an income source for the Buono family as it is, but 30% less than “right around zero income” would mean we’d be paying a whole lot of off-farm income for the privilege to grow for others. I love my job! It is a privilege to do what I feel I was meant to be doing! But jeez, there’s a point where I guess I would have to let it go and find something else productive to do. Husband Frank, in a strongly worded soliloquy, let it be known to all involved, and some that weren’t, that the farm had to stand on its own.

We do have a well already in use on our farm, but our water bill from Rainbow Water District is often over $2,000 a month, which augments our water well. We also have a live spring that bubbles water up from the ground. The previous owners built a pond that catches that water, and we pump it out twice a day. And now we needed another well! Right after the fires, I made a call to the well driller who had drilled the farm’s first well, many years before we bought the farm. He came out, did some “well witching”, plunked a flagged stake in a suspiciously convenient place to drill (right in the middle of my first garden, at the end of a paved road), got his $2,000 deposit, and said he’d be back in a week or two. Never heard from him again.

Amid the devastation and disappointment of the fire loss, I had to come to the conclusion I’d been taken! Crap! I was despondent. We had to start all over, this time with a well driller that was well known. Again, we made a deposit, and got put on the waiting list. Husband Frank wanted another witcher to come out, since the first guy turned out to be a con artist. Since where you drill is such a huge decision, and so much rides on the result, not relying on the recomendation of someone who’d proven himself dishonest was a no-brainer. To tell you the truth, I thought the whole witcher thing was iffy, anyway. My opinion is backed up by well driller Paul Stehly, who was uncomfortable telling me his honest opinion because the issue evokes feelings that border on the religious for many of his customers. I just about had to drag it out of him, but the truth be known, he wouldn’t hire a witcher if he was drilling for himself.

“Okay Paul, what do you think about witching?”
“ I like to think it’s important what you, think.”
“ Okay Paul, you think what I think is important. I think what you think is important. So tell me, what do you think about witching?”
“ Well, you could hire a witcher, and then water might be found where the witcher tells you to drill.”
“Or not?”
“Yup.”
“ If I hire a witcher will I have a better chance of hitting water when you drill?”
“ No.”
“No?”
“No. My experience is that it doesn’t increase your chances, except to feel better. You can witch and hit water. You can witch and not hit water. You can not witch and hit water. You can witch, and then the city won’t let you drill where the witcher suggests, drill somewhere totally different and hit water. You gotta feel good about where you’re drilling because it’s a huge risk, and you’re the one paying the bill. If witching would make you feel better, especially if you have to write a check for a couple of unproductive wells, I’d recommend witching. If you witch and don’t hit water, maybe that would make some customers feel better; like they did everything they could do to increase their odds. But witching isn’t going to increase your chances of actually finding water. If there was any method, any method at all, that could predict where to drill for a sure, the person who offered that service would be one rich guy. There wouldn’t be any more dry wells dug, ever!”

I relayed this morsel of valuable information to my husband, who had seen some television science show on witching for water and insisted I was out of my mind and we needed to hire a witcher. I didn’t want to hire a witcher because it would add a delay, cost money, and the expert out there said it wouldn’t increase my chances of hitting water anyway. An argument ensued. We solved it thus: Frank had to pay for the witcher out of his own pocket (which I’m not sure what that exactly means since we’re married, and all pockets are fairly commingled—except for this: the farm business wasn’t paying for that witcher unless we hit a whole lot of water) Then, filled with risk-taking bravado, Frank threw a $100 bill at me and said he’d bet me we’d hit a whole lot of water and was I in or what? So the deal was if we hit a whole lot of water, the farm had to pay him back for his witch guy, plus I’d lose the $100 bet.

So the witcher came out and flagged a spot that wasn’t all that convenient but a whole lot better than drilling in the center of my garden. Just for fun, I asked him to witch the spot that the previous, disgraced well driller/witcher/con artist man had flagged. He said, “Got no water here. Maybe 2 or 3 gallons a minute, but not worth pumping.”

Well that’s interesting. Not that I’m saying I’m admitting the witching thing is credible, but at least the witchers, doing their witching thing, which according to them is scientific, should have been in agreement. Unless one of them was a con artist.

Paul, the driller, said he’d have his rig in probably on Tuesday, the day after the Martin Luther King holiday. He had said he’d go down around 500 or 600 feet before giving up; that being a typical well depth for the area. We could go right to 1000 feet, but my concern about a 1000 foot well, even if we did hit a good water supply, was the cost to pump that water up. The further we went down, the higher the monthly cost to pump would be. If we didn’t hit water at 500 or 600 feet, we’d probably want to cough up enough to immediately try another location. Paul warned us that a dry well was a possibility, and two dry wells were a possibility as well. And of course we’d still have to pay his bill, immediately, with or without water. That’s the risk, and why so many farmers don’t drill. If you sink two holes on the same day, it’s cheaper than trying on separate occasions because of the cost of the rig move-in and set-up. We were braced for whatever the outcome would be. Whether or not we continued farming hung in the balance.

So when I got an excited call from Paul on MONDAY, I was shocked! He’d started to drill, and I wasn’t even there! I sure had wanted to watch. I thought he was going to start on Tuesday. Frank was even going to take a day off from work, which is really something for Frank.

Over the roaring din of a drilling rig, Paul shouted that he’d hit quite a bit of water and he was only at 105 feet or so. Just to let us know! YES! I lost the bet! 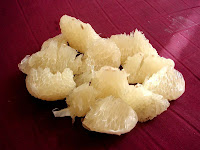 Those would be some pretty whoppin’ grapefruits, but no, they’re pomellos. Considerably larger than grapefruit, the pomello is milder and takes a little more work to enjoy. The segments look exactly like grapefruit, but the pithe between each segment is too tough to eat. Separate the fruit from the pithey segment material and pile into a bowl to enjoy. They have very little tartness to them, so some people who don’t enjoy grapefruit, do enjoy pomello. I keep saying I’m going to cut the few trees we have down because we only get a few fruit on each tree and they are a whole lot of work to eat. That is, if it weren’t for my daughter, Tess, who loves the fruit and doesn’t mind fiddling with the whole peeling procedure. Tess is quite protective of the fruit trees she in particular enjoys, (mulberries, guava, fig, blackberry, kiwi and pumello) so for now the pumellos are safe.

The weird root looking thing in baskets this week is kohlrobi. Peel and prepare much like you would beets. Cut into large pieces, steam, drizzle with a little olive oil or freshly made butter. A nice addition is a little crumbled macadamia nut scattered on top. Some people like them mashed, with butter, salt and pepper. I’m told the Chinese prepare it two ways, typically: one is very lightly sauteed and still a little crunchy, and the other is cooked fairly well to the consistency of a scallopped potato. Either way is delicious! Who knew such an ugly looking thing would be so tasty. Enjoy.

For some reason, Blogger is not cooperating today, so I am posting the following for Donna – T.

Those little bitty orange looking things in the clamshell are Nagami Kumquats, in season now! Usually they come in, in time for Thanksgiving dinner. This year they’re quite tardy. Chris Aliseo, Costa Mesa CSA supporter sent me this link for recipes: http://www.kumquatgrowers.com/recipes.html. My favorite use of kumquats continues to be a simple reduction. Throw them all in a blender, add water to top. Blend. Force through a sieve to get rid of the seeds. Boil down with sugar to taste into a syrup or reduction. I use the reduction in margaritas, on top of crepes, to sweeten limeade, and as a dessert topping. Another favorite is cooking them whole with a little sugar and water until they’re translucent and using them as a jam.