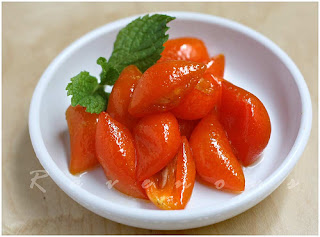 This is such a simple recipe, and the results are amazing. Even if you disdain fresh kumquats, this concoction is worth a try.
Ingredients:
1 pound of kumquats or so, cut in half and seeds flicked out.
1 cup water
2 cups sugar
1 teaspoon of a mixture of cinnamon, nutmeg and cloves
In saucepan, bring water and sugar to a boil. Boil for 3 or 4 minutes, which will thicken the sugar mixture to a syrup. Add fruit and spices. Lower heat and simmer for 10 minutes. Use slotted spoon to remove kumquats from the mixture. Continue to cook the syrup to about half what you started with, then pour over fruit, jar and refrigerate.
0 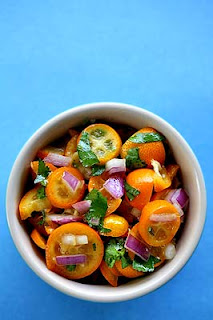 Directions:
Mix carrots, green onions, cilantro and kumquats in bowl.
Combine vinegar, lime peel, mustard and paprika, and then wisk in oil.
Season vinegar mixture with salt and pepper to taste.
Pour mixture over carrot/kumquats. Toss to coat evenly, and chill for at least two hours.
Spoon salad into lettuce leaves and serve.

This is a little heavy, I think it’s best sliced thick and toasted.
1 cup of kumquat puree: Halve fruit, and flick out the seeds. I use a Cuisinart or my Vitamix to puree.
3/4 cup of honey
2 Tbs. oil
2 eggs
1 Tbs vanilla
1 1/4 cup of whole wheat flour (I buy the whole grain and Vitamix the flour as needed. Like coffee, flour is best when freshly ground.)
1 cup of rolled oats
1/4 cup flaxseed meal. (I buy the whole seed and Vitamix. It’s super easy!
1 Tbs. baking powder
Pinch of salt
2 Tbs. cinnamon
1 1/2 cups of chopped nuts and dried fruit like raisons, persimmons, etc.)

Directions:
Put all dry ingredients into a mixer, mix thoroughly. And then add wet ingredients. Combine well, add fruit and nuts. Use a greased loaf pan and bake at 350 for 45-55 minutes. Don’t over cook. 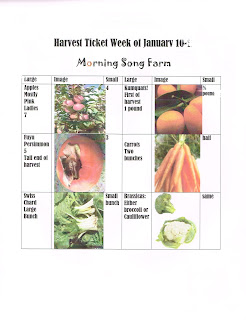 Greetings!
I didn’t post last week’s harvest ticket. It seems that computer issues are the bane of my existence, and every now and then I’m dead in the water with an issue that I can’t figure out in a timely manner. I’ve had a virus for months that repeated trips to the tech guy in nearby Temecula hasn’t solved. I’ve given up and actually BOUGHT A NEW COMPUTER, rather than continue to suffer.
Anyway, now that I’ve vented, on to farm issues. This week we’re finally beginning our kumquat harvest. Yeah! As I’ve said before, we usually start harvesting in time for Thanksgiving’s cranberry/kumquat recipes but not this year, by a mile. So the fruit is beautiful, and I think sweeter than past years’. Although popping a few in your mouth as a snack isn’t a terrible notion, to truly experience what a kumquat can be, requires heating. Like quince, the rich, complex flavor of the kumquat isn’t realized until it’s been cooked. So give it a chance! See separate recipes below.
We’re finishing up our persimmons, I don’t think we’ll have any next week. They’re ripening on the tree now, and the ones you receive will need to be consumed promptly. They’re best like this, but have poor shelf life. I’d love to hear if anyone tried drying them. Please share your experience if you did!
Our amazing sprouts are still taking two weeks to sprout, though moved to the greenhouse. So this week’s boxes have none, next week’s will. We’re working on making a greenhouse inside the greenhouse in hopes of creating a micro climate that will allow us to produce sprouts on a weekly basis while we wait for Spring to arrive.
We probably have enough macadamias to begin cracking out next week; or at least I think so. And we’ll begin our Hass avocado harvest next week, too. Don’t get your guac recipes out, though; because in the very first part of the California avo season, it takes a minimum of 10 days off the tree before the fruit is ripened. Most Hass in the grocery stores (and ahem…in the farmers’ markets for that matter) is from South of the border.
0 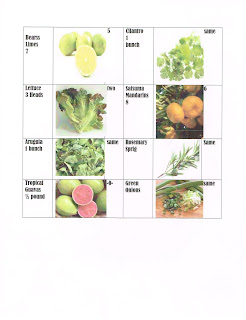