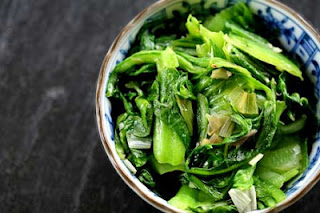 If you’ve never tried mustard greens, large box subscribers may have found their new best friend. Popular in Chinese, Japanese and Indian cooking, mustard greens have only rarely found themselves in US restaurants until recently. Related to kale, cabbage and collard greens, they are packed with nutritional value. See link here: http://www.whfoods.com/genpage.php?tname=foodspice&dbid=93
The leafy green originated in the Himalayas and has been consumed for 5,000 years, just not much in the U.S. until recently. Part of the recent interest in mustard greens is the cholesterol lowering ability and cardiovascular support of the raw or cooked leafy green. The link above goes into a great deal more detail of how that works for those that are interested.

Rinse leaves under cold running water and cut into chunks for quick and even cooking. Let them sit out of your refrigerator for 5 minutes before cooking, which helps activate healthy enzymes. Slice celery on the diagonal, and toss in the pan along with your greens.

In a medium saucepan, boil a quarter cup of water or broth and add mustard greens and sliced celery. Cover for 5 minutes or until tender. Toss with a tablespoon of olive oil or coconut oil, a crushed garlic clove, a splash of lime juice, sea salt, pepper and serve at once.

This is where having a Vitamix at the ready really comes in handy, although a lesser mixer will probably do the trick, just not quite as smoothly. 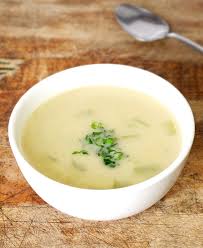 Procedure:
Sauté onion, celery, garlic and potato in oil until soft, taking care not to use too high a heat that might result in browning. Put the equivalent of 2 cups of water in crushed ice in your blender, and add your finished, sautéed mixture. Blend until smooth and serve. Add a little more chilled water if the end result isn’t liquid enough, stirring thoroughly.

Another quick and tasty side dish from Morning Song Farm. I dumped the entire bag of this weeks’ braising mix in my largest sauté pan and chipped maybe a tablespoon or so of coconut oil into the pan to melt. I added a couple crushed garlic cloves, sliced up a few green onions, and added mushrooms, sea salt and ground pepper. Also a few strong splashes of hot sauce.

I use a counter top rice cooker for brown rice and other grains, and usually have it going every morning to add to some dish or another. So I already had the rice cooked, and waiting. I love the aroma of coconut oil and leafy greens in my kitchen. And although coconut oil is very mild, it does have a tropical taste that I enjoy. When the greens were almost done, I just stirred in the brown rice, and served immediately. I made more than I needed, and made up single serving portions and put in the refrigerator for lunches and healthy snacks. I tried it both reheated and chilled and served as a salad, right out the refrigerator, and they both are tasty.

Carl has outdone himself yet again, and all whose so-called unreasoning, prejudicial complaints in re Carl’s behavior, lodged against his “mother,” Goat Whisperer Lance; are united today to celebrate a minor, yet joyous vindication. It reminds me of the time my ex insisted his unbelievably  car-phobic dog was too car-trained, and his spectacularly ill-fated attempt to prove his point by having the dog ride in his brand new Jag. Oh yes, vindication is sweeeet. Carl has taken to wondering south, lately; all by himself…  (a very ungoatlike thing to do) and browsing down to the packing house where the weeds and treats have proved to be less impacted by other, less trail-blazing, munchers. Although a known break-and-enterer up here by his barn (which means that young and old, residents and visitors alike must, without fail,  remember to BOLT all exit doors or Carl will end up in the living room or his head in my recyling bin), Carl has found enough trouble to get himself into locally, and hasn’t ventured south by more than a few hundred feet. Complaining about Carl  has met with his mother’s insistence that it’s not provably Carl’s fault. Or that he’s being profiled. Yes, that was actually a position taken. Or that, if it is Carl’s fault, not that that point is conceded…but if he is involved in an incident,  he’s helped us all become more situationally aware. My favorite. Or the post goat break-in wreckage that is my living room maybe isn’t any goat’s fault, as in who knows maybe one of your teens left it like that…..

So the discovery this morning of Carl’s intrusion into the Goat Whisperer’s office is cause for celebration. Good boy Carl! The really important papers are on the desk, and oooh, the books in the shelf are sacrosanct. 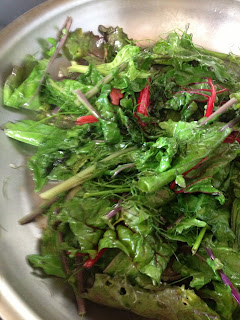 In the last couple weeks our farm boxes have included a “braising mix,” a blend of young kale leaves, leafy fennel, baby Swiss Chard and a bit of green onions or chives. As kale is among my favorite leafy greens, I really enjoy the nuttiness of this intended-to-be-stir-fried mix. I just use a bit of coconut oil  chipped into the sauté pan and dump the whole bag right on top. (I’m currently using an unrefined, virgin coconut oil that is certified organic.) Interestingly, the oil is liquid at room temperature, but is harder than butter right out of the fridge. I keep mine refrigerated. Anyway, heat until sizzling, and the greens are wilted and tender. The coconut oil lends a subtle, sweet tropical taste to the finish to which I add slivered kumquats, flicking out the seeds as I go. As I’ve said before, cooking brings out the complex flavors of kumquats, so don’t give up on them if you’ve only eaten them raw. I served this with a steamed brown rice and found the meal quite filling.

Hemp! Not Just for Rope!

Now that Colorado has thumbed their collective nose at the Federal Government, farmers in that state are preparing land for the first hemp planting in this country for over 60 years. 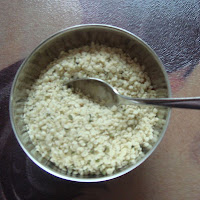 Hemp is a relative of marijuana, although the plant is said to offer a high right up there with smoking newsprint. So here’s the thing: our Federal Government’s response to the fact that there is a botanical relationship between the two plants (hemp and marijuana) is akin to hanging you because they think your cousin robbed a bank. Maybe that’s good enough for government work, but the War on Sanity, AKA the War on Drugs has done a lot of harm to farmers, as we’ve watched our friends to the north in Canada happily grow the lucrative crop and then SELL the end result here in the States, while growing it ourselves carries the same legal liabilities and dangers as growing marijuana. Brilliant!

There is a congressional effort afoot to change the Federal law; see: http://www.naturalnews.com/040606_farm_bill_Rand_Paul_hemp_farming.html

but since keeping hemp and marijuana illegal is a collusion of  revenue enhancing government asset forfeiture and a corporate prison /legal industry in itself, I’m not holding my breath. Although, I have always said that the War on Sanity will come to an end when enough of the kids graduating from high school and in college today arrive in the halls of power. The utter idiocy of their parents’ and grandparents’ long standing support of this ignorant injustice will be thrown into the ashbin of pigheaded close minded, foot shooting stupidity where it belongs.

That said, in the spirit of paving the way to a greater awareness, enjoying the fruits of our Canadian Hemp growing farmers is easier than ever. Sprouts now offers Hemp Hearts from Manitoba Harvest, and I’m telling you, they are really tasty. You don’t have to be a health food advocate to enjoy hemp. Honestly, they rate right up there with macadamias, they’re that good. After purchasing, I thought I’d need to cook the grain like rice, but the product I tried is best right out of the bag, raw. Here’s the message from Mike Fata; the co-founder of Hemp Hearts:

“In 1995, I was unhealthy and unhappy. At over 300 lbs., I was unable to live the active, outdoor lifestyle I desperately wanted. Then a friend introduced me to hemp foods. Packed with nutrition, these versatile hemp foods provided the nutrients my body was craving. Before long, I had enough natural energy to climb a mountain, and a message to spread once I got there. 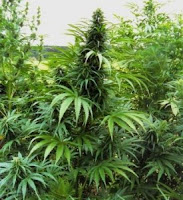 Honestly, these nutty little nutrient-packed seeds changed my life. Because hemp foods did wonders for me, I wanted to share them with the world! So in 1998, I, with my friends Martin and Alex, started Manitoba Harvest.
Today, we’re proud to bring you Hemp Hearts, the very best and most nutritious part of the hemp seed, the heart. By shelling the hemp seed, you get only the center..with its raw nutrition, rich nutty flavor and tender crunch. It’s a delicious, it’s sustainable and it’s packed with goodness. Try hemp–it could change your life.”

Frankly, I know,  it sounds like hyperbole until you try this stuff!  I’m hoping that enough people try hemp, that a ground swell of common sense will eventually whittle away the current, multi-faceted injustice against farmers, property owners, and consumers alike.

Notes From The Farm

Ha! First year in many that we beat the local apricot thieves to our harvest and can actually offer apricots at all. Only large boxes, but it’s better than last year, or the year before, or….

I have to admit I’ve somewhat sidelined taking care of the apricot grove after years of pointless care, so the trees are in need of caretaking. As soon as the fruit is gone, we’ll do the summer pruning, mulching and feeding. Perhaps my local, vocal, neighborhood remarks about stealing from others finally sent the message needed. Or the thief moved away. What’s true is that sometimes locals don’t see stealing a neighbor’s fruit as, well; stealing. And in this case, it’s not just stealing from us here, but from everyone participating in our CSA.

Too, our loquats weren’t stolen this year, either; and large shares got a taste of this unusual back yard fruit. Similar in flavor, I really prefer loquats to apricots; the skins are tart and bursting with flavor. The seeds are almost always viable, by the say, so you can easily start your own tree from one of the large black seeds found at the center of the fruit. When I first grew loquats in San Clemente, I had to be careful not to toss the seeds onto the lawn, because we’d have so many loquat trees growing in the lawn in a couple weeks. So, they are really easy to get started! You won’t usually find loquats in the grocery stores because they don’t store or travel well; and are rarely as cosmetically perfect as has come to be expected. But those challenges aside, they’re worth enjoying, especially if you like to try different fruit.