I wish we could rename the common yam, or at least my recipe below, to something with a better marketing zing. This pie is really rich and tasty, even for professed yam-haters…and doesn’t take a lot of work. I actually made it last night without a crust, (which makes it not a pie, actually)… pouring it into a glass brownie pan and then serving in squares with freshly whipped cream. I had meant to cool overnight and serve for dinner tonight, but I see my teenager has eaten most of it for breakfast…rendering any planned photo op somewhat useless, except as proof of its tastiness. 🙂
(see empty dish….draw conclusion.)

Bake 4 or so yams in the microwave or oven until soft. Cool so you don’t burn yourself scooping out.

You need:
2 cups of mashed yams
1 and a half cups of rich cream.(and extra if you want whipped topping)  I’m sorry to say that I’ve discovered for the first time that I can’t buy cream, either organic or conventional, that isn’t ultra-pasteurized. More on that later.
1/4 cup of dark brown sugar
3 tablespoons of black strap molasses
1/2 cup sugar
1/2 teaspoon salt
2 teaspoons cinnamon (I prefer to grind my own from cinnamon bark)
1/2 teaspoon allspice
2 eggs

I didn’t bother to do a two step process. I just threw everything into my counter top mixer and mixed until smooth; and then poured into my glass brownie pan that I had buttered and floured to prevent sticking. (May not have been necessary)

Bake at 425 until a fork comes up clean when poked in the center.

I whipped a half cup of whipping cream with sugar and vanilla and had planned to use that as the topping. Since that’s missing too, I will assume it was used as intended. 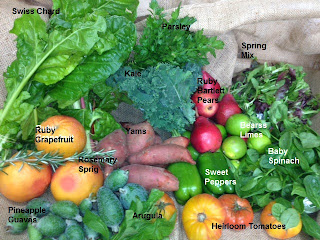 This week’s Large Box shot. A few random boxes received spaghetti squash, and all Wednesday boxes received sprouts. (sprouts weren’t quite ready for Tuesday’s boxes as we are trying to adjust start times as the weather has cooled.) Wednesday Large Boxes received two clamshells of sprouts: one of our Daikon Radish Sprouts, and one of our Brassica Mix Sprouts. All Wednesday Small Shares received one or the other. I know I’ve said this before, but it’s worth repeating: radish sprouts (and today’s clamshells both have radish; either as a single seed or in the Brassica mix) will have tiny, white fibrous roots on the radishes. This is sometimes mistaken for mold, but is just our healthy, just -harvested radish sprouts–fibrous roots and all.