Some of you may recall that the family New Year’s Resolution involved demonstrating once and for Who Is Really In Charge Here and definitively fence in (corral) Carl The Goat Terror and his cohorts where they belong, like the rest of the goats on the planet. This has been a long term endeavor, and not to be over reaching; we agreed that getting the task done SOMETIME in 2014 was a reasonable goal. Setting about the job without proper consultation would never do, as we mean business this time, Carl. So I called Premier Fencing’s tech support line in the first week of January. They’re the folks that handily instructed us how to create a llama corral that was never, ever questioned. Not by the resident coyotes, and not by our herd of three hundred pound llamas. The fence was never defied..a flagship of human will over a grazing animals instincts to eat the surrounding landscape into dust. Our otherwise untrainable dog was indeed trained in a single dog-meets-electrical-fence event, and that was that. So I had every reason to believe we were entering our next successful corral building endeavor. Pricey though the components were, I selected the sturdiest and best in each category. Let it not be said that failure was due to parsimony.

Tech support guy said the first strand would be 4 inches from the ground, and the last would be shoulder height. Days of digging post holes and cementing in posts turned into hours, and hours, and hours of drilling insulators exactly thus, and then days of stringing (the very best) electrical wire through all those insulators..until finally we were ready to flip the charger switch and do the family We Beat Carl And His Band of Criminals Dance. Ha. Son Frankie did the electrical switch honors, and daughter Tess insisted on a lawn chair and snacks to witness our dominion. As expected, Carl came charging toward us, with the fence surely at the ready to halt him. As he approached, he didn’t even slow down. No. He leapt through the lines, thereby losing his grounding, absolutely a necessity for a shock, and sooooo, fence was totally worthless. A decorative frame etched on our hillside as as some sort of modern art installation. Tech guy apparently wasn’t aware I have special,  flying goats. The rest of the herd followed in seconds, each flying through the lines, just like Carl the Criminal had shown them. Tessa handed her snacks to Carl in defeat, and tight lipped.. folded her lawn chair up without comment.  Frankie rolled his eyes at me like only a teenager can, and just said, “really, Mom?”

By admine9519 | Uncategorized | No Comments
Ingredients

Large Share Garden n Grove box subscribers will find the ghostly parsnip in their boxes this week.
So, no more difficult than mashed potatoes, and prepared essentially the same way. You just need to add less butter and salt to your end product because parsnips are more flavorful. Peel and cut your parsnips and boil, just as you would to make mashed potatoes. Be careful not to overcook into mush. Drain, and either use a mixer or a potato masher to puree into a mash. Add salt, pepper, and cilantro garnish. Serve warm. 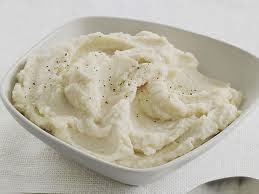 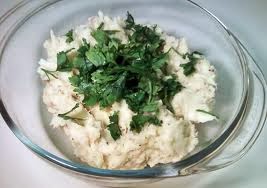 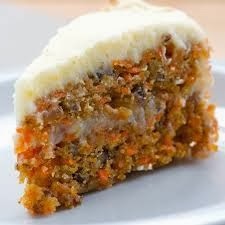 Ok, I admit I’ve proclaimed this distinction before, but this time I REALLY mean it. Anyone who is a carrot cake aficionado needs to try this recipe just once. Considering there doesn’t seem to be anything really that different about the recipe, I don’t get it. Why is it so much better than I remember carrot cake being?  Anyway, Crew Member Shay, brings this in from time to time, and he’s kindly offered the recipe to our CSA members today. I know some Large Share Garden N Grove subscribers have quite a few carrots to contend with lately. (I’ve been juicing mine.) But today….cake.

Preheat oven to 350. Butter and flour two 9 inch cake pans.
Line bottom of pans with parchment paper.
Whisk first 4 ingredients together in a medium bowl.
In a mixer on medium speed, blend sugar, oil and butter for about 3 minutes.
Mix in eggs 1 at a time then add flour mixture and remaining ingredients just until combined. Do not over stir. Divide batter in pans and bake for approximately 30-40 minutes or when a toothpick inserted comes out clean. Cool in pans for 15 minutes, then remove from pans and cool completely.

Beat cream cheese and butter until light and fluffy. Slowly add powered sugar until well blended, then add maple syrup. Chill until you are ready to use. Frost cake and chill serving.

Kind of a funky week, we have only a few Oroblanco Grapefruit ready to harvest, and the last of the baby carrots; so large shares got one or the other. Normally when we have only a little of something, it ends up in the Trade In boxes, but we had too much of both for that. So the harvest crew decided on that division. We’re skipping a macadamia packaging week, but will have macs back in boxes next week. 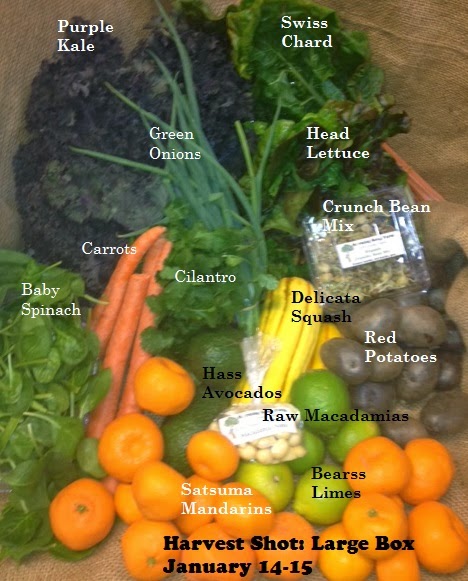 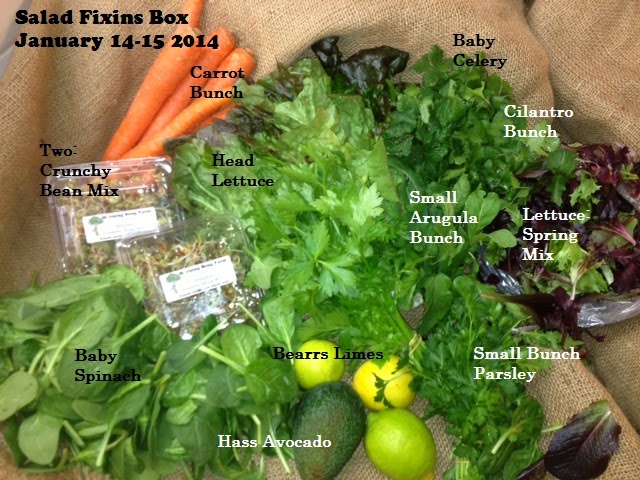 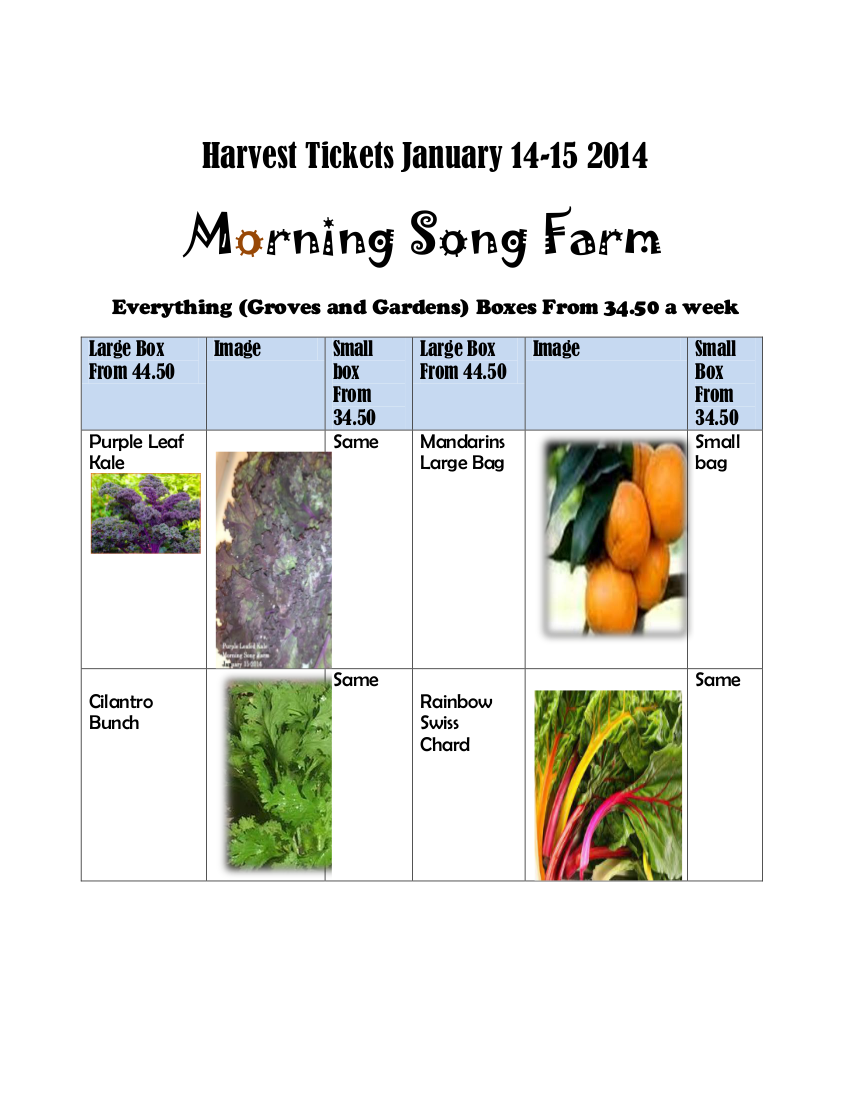 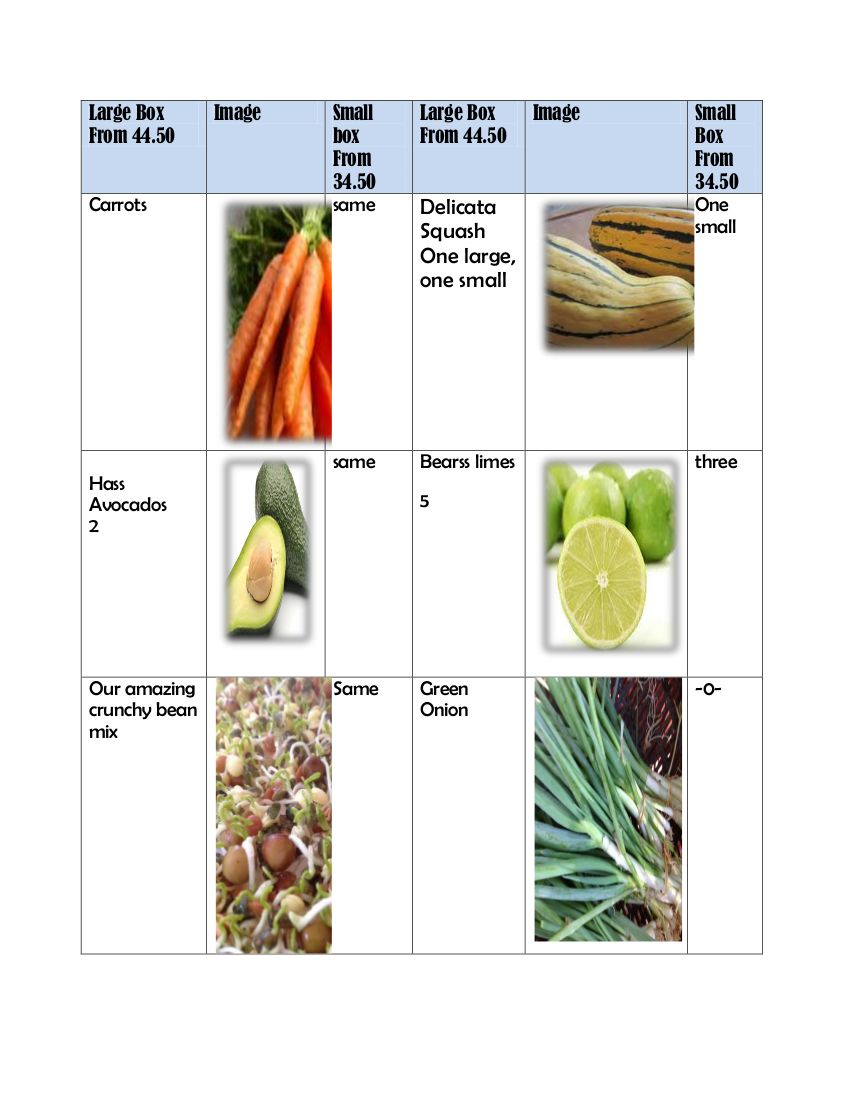 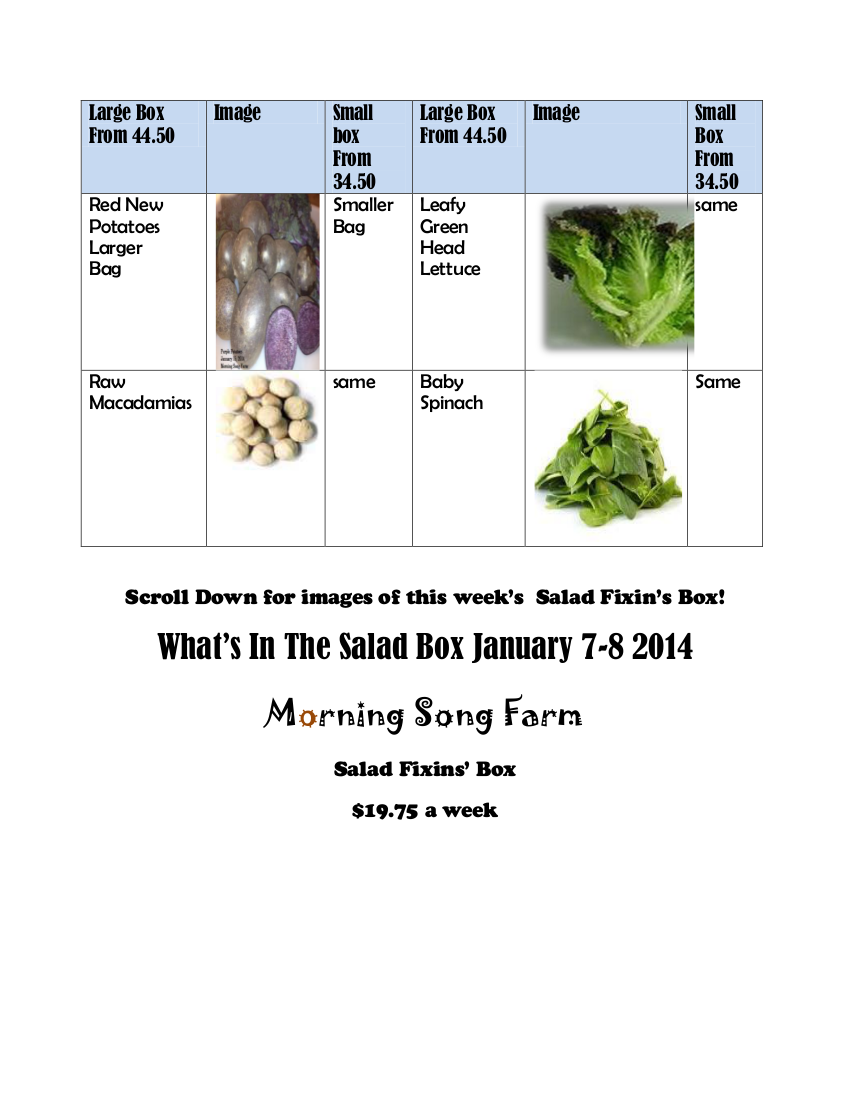 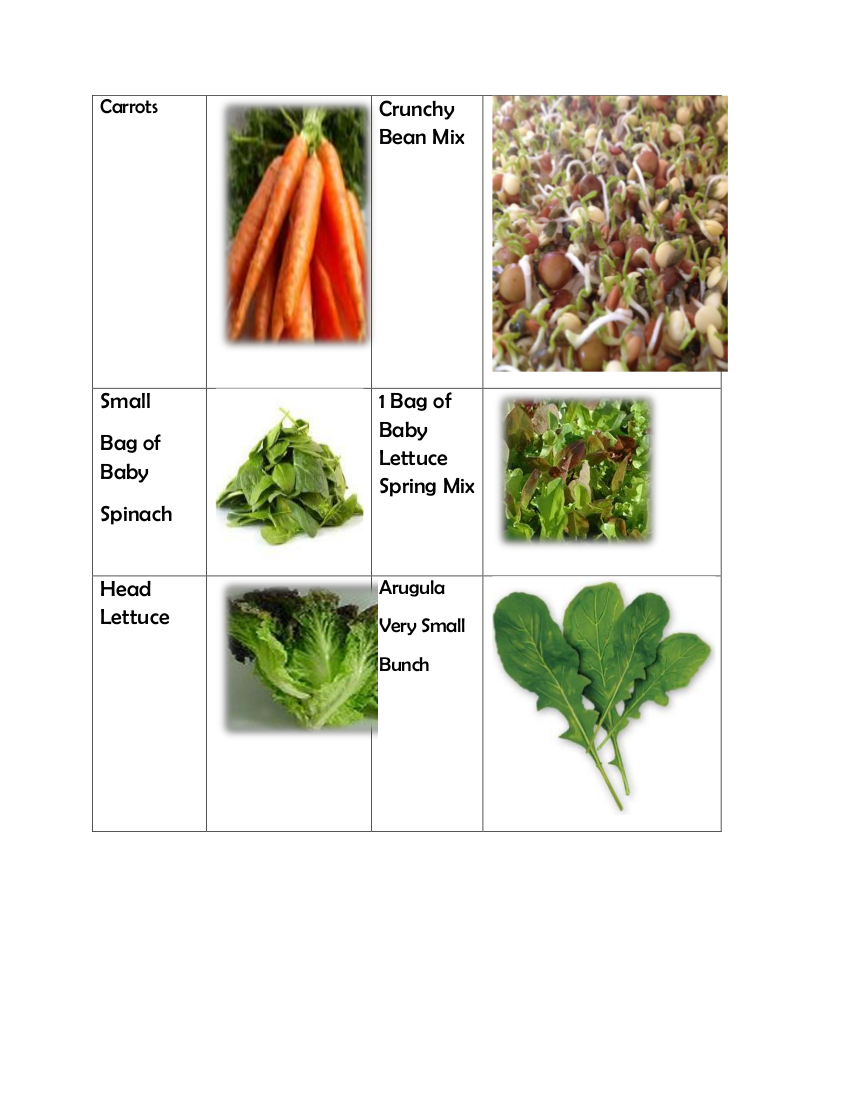 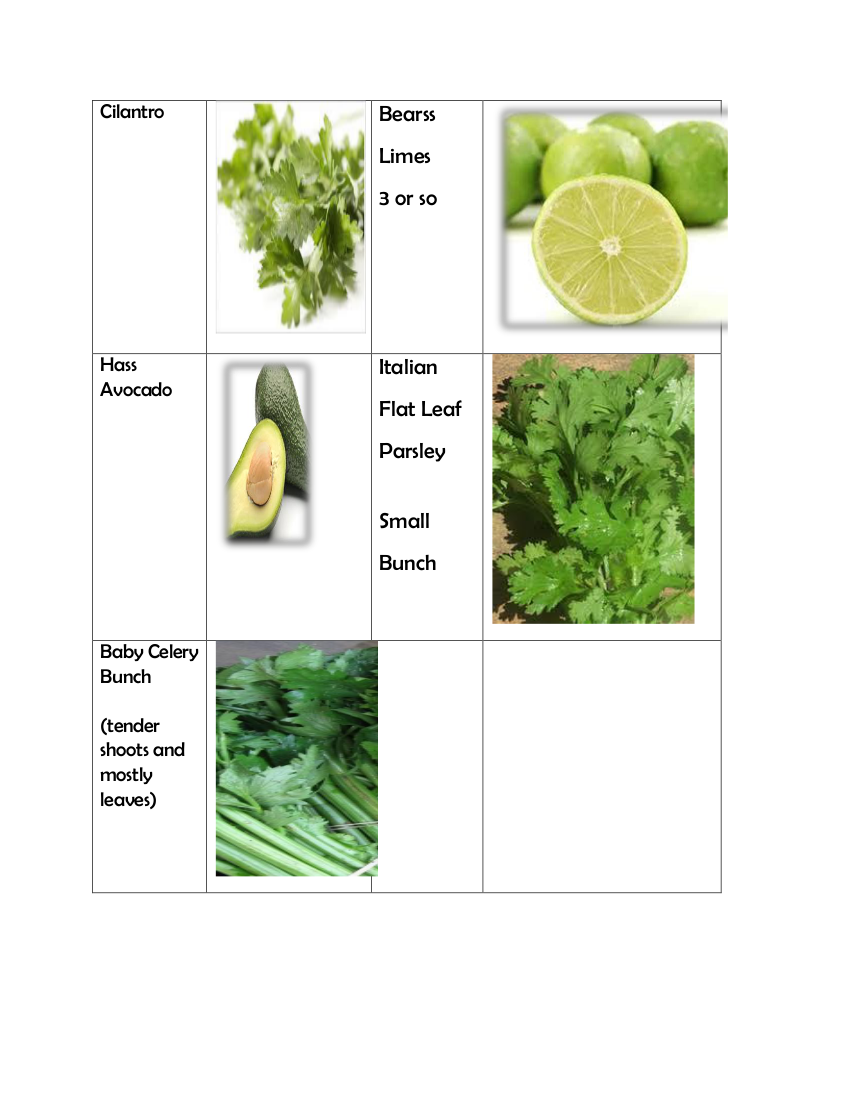 Things have gotten back to a dull roar here on the farm after the Christmas holidays. Carl and his cohorts are finishing up this year’s Christmas tree and wreath, so I wont have to drag it to the front of the property for the Chirstmas Tree Pick Up Crew, after all. The goats are treating the dried tree as if it’s a foreign delicacy, with Carl lording over which family member gets the best munching position…after him that is. He abandoned his tasty tree guarding duty long enough to escape from the corral to eat all of the newspaper I had carefully taped to the side of the house as a drip guard for the long awaited painting of the farm house. Sometimes he lets us think that we’ve solved the Goat Escaping Issue, just long enough for us to high five each other, do the We Beat Carl Dance, and get complacent. He ate the blue tape, and all the newspaper that I’d spent hours getting just right. We continue to work on electrifying the corral, but have encountered technical issues that our friend Bob is addressing.

We’re continuing to gather macadamia nuts, and they’re in both small and large boxes today. I tried a chocolate covered macadamia recipe: melt a semi sweet chocolate (I buy ours from Trader Joes) in a glass bowl. It doesn’t look melted if you use a microwave for this until you take it out and stir. Toss in nuts, put spoonfuls of coated nuts on wax paper and chill in refrigerator. Make the clusters small! This is a very rich
dessert. 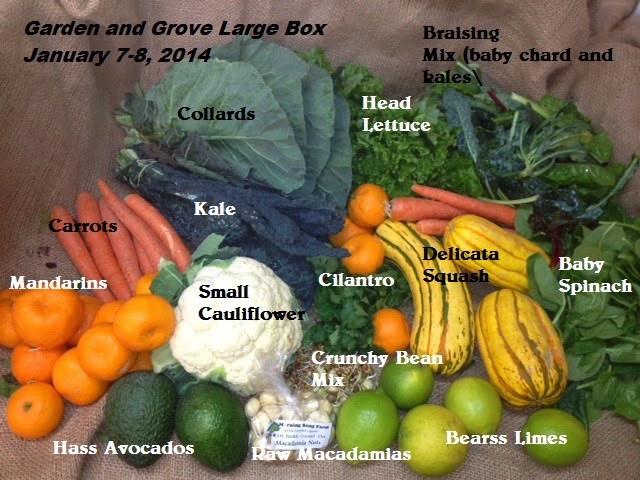 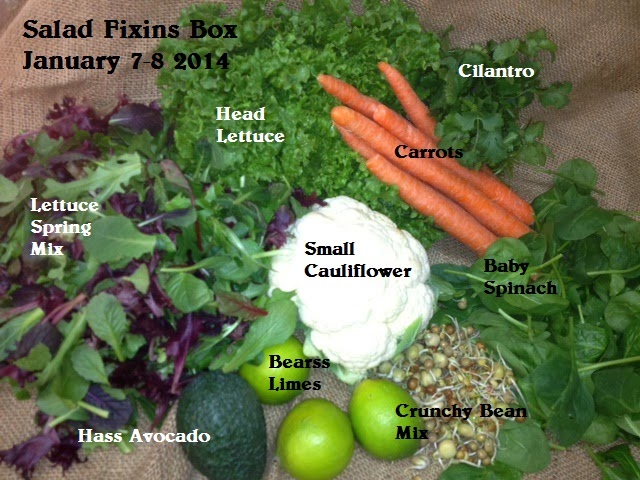 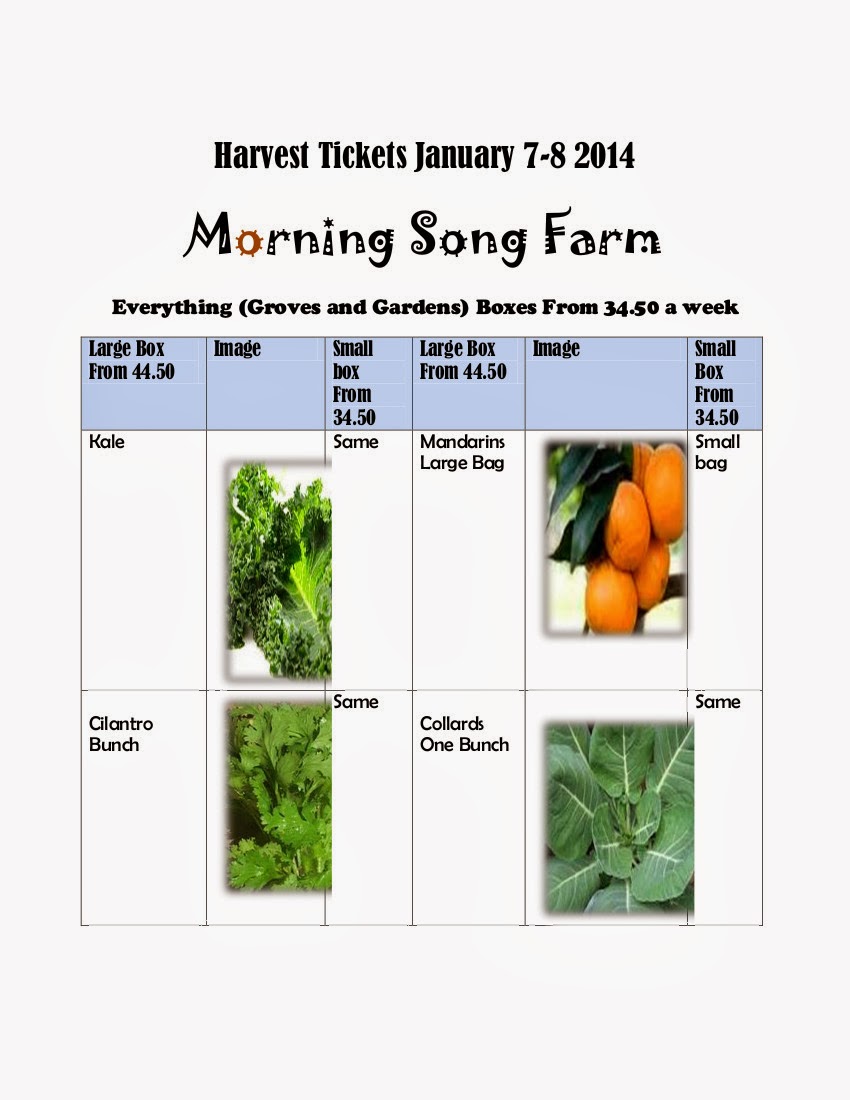 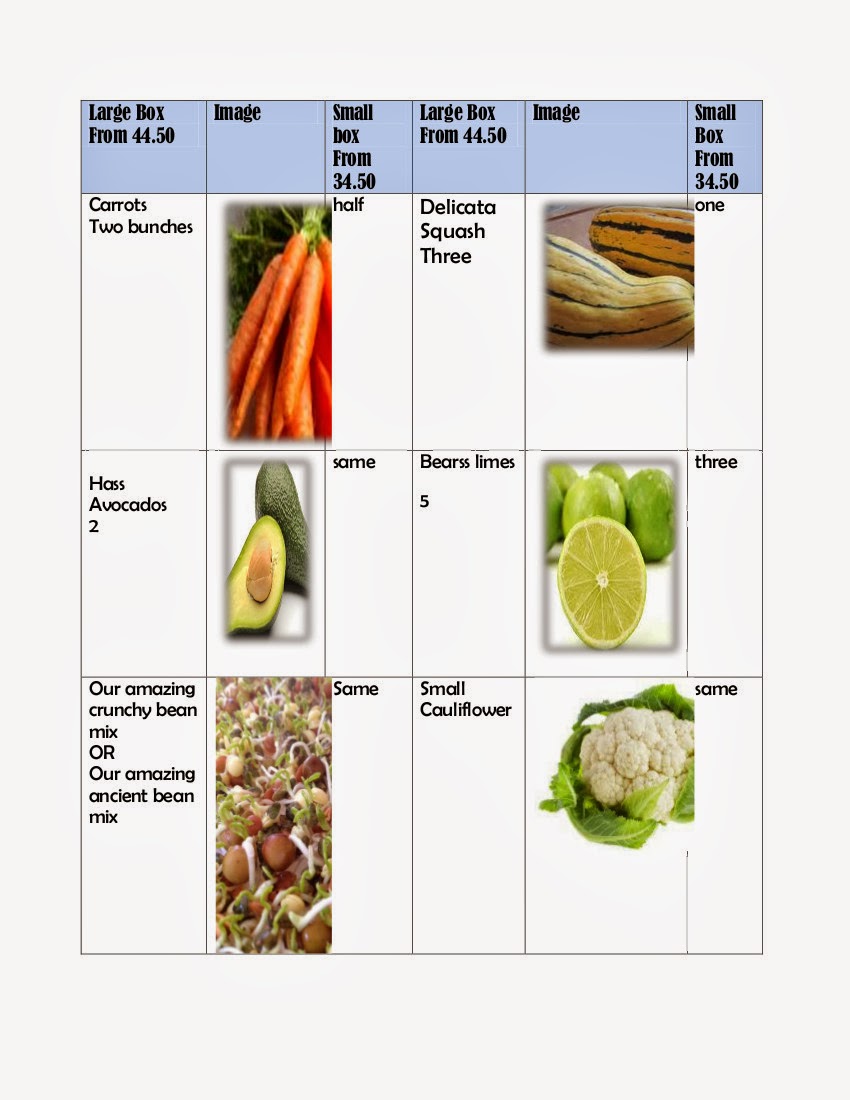 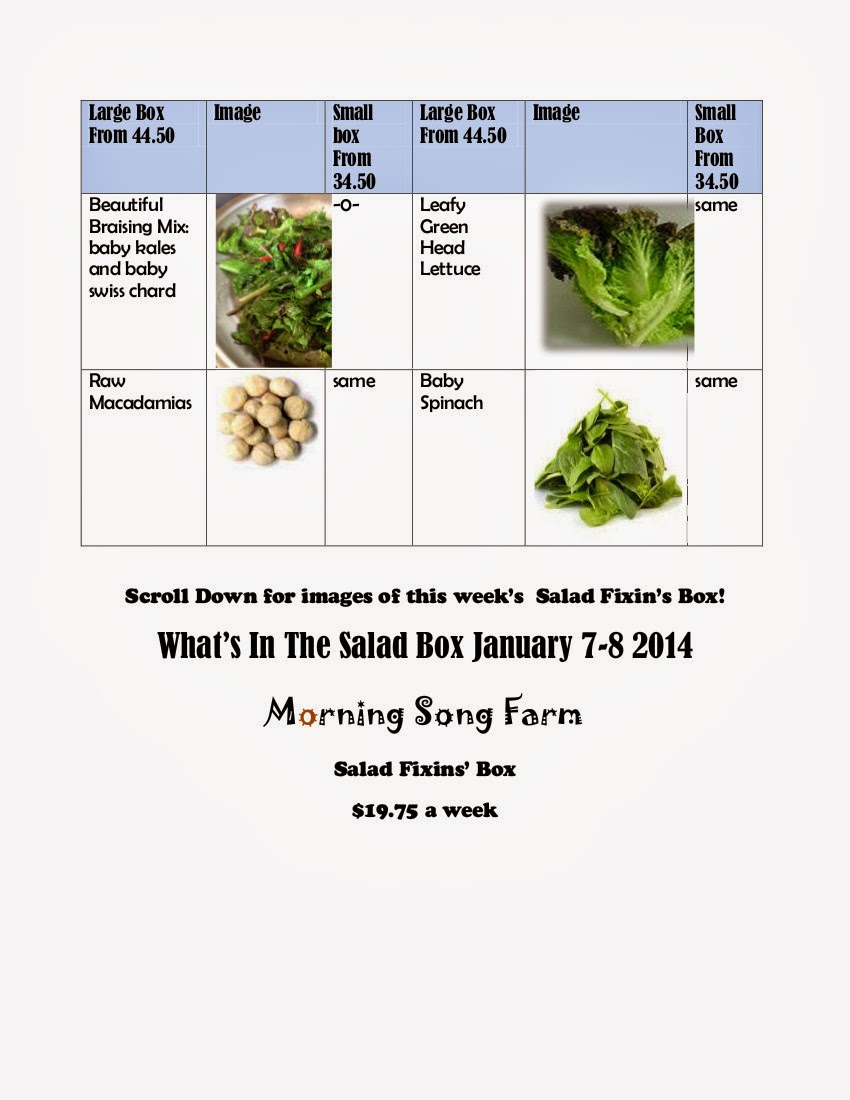 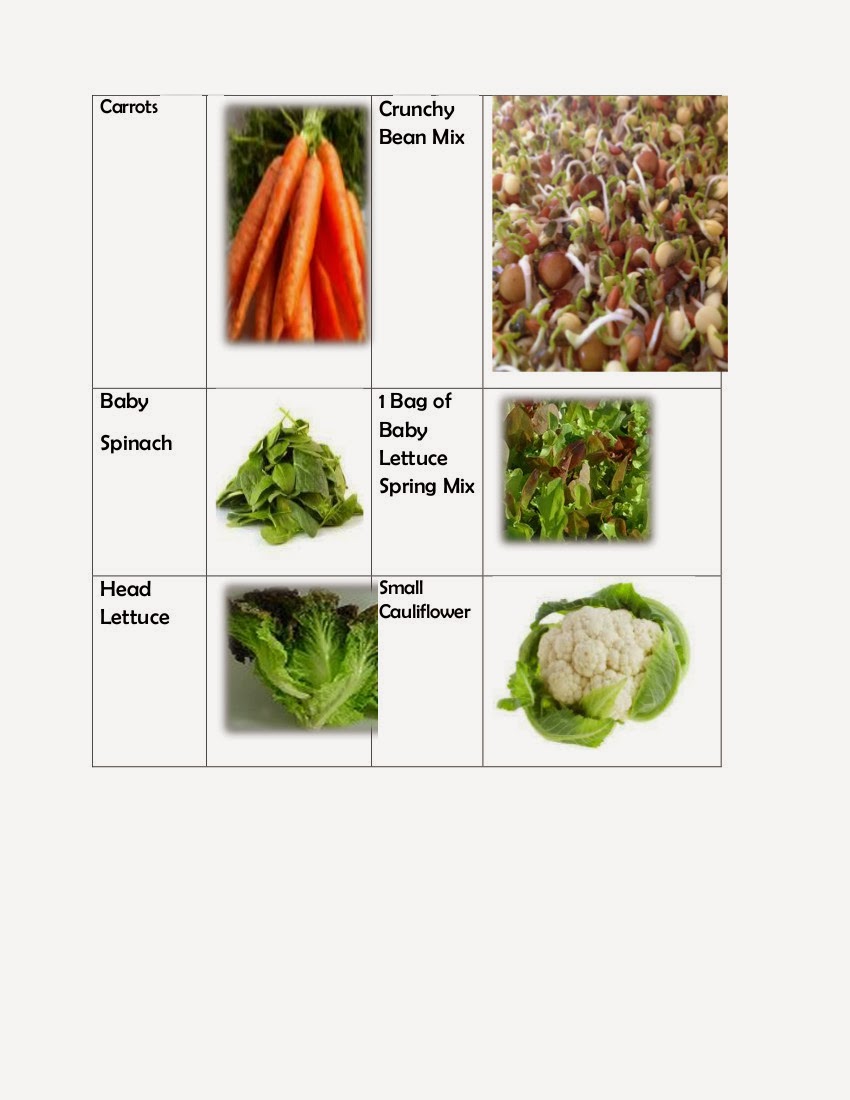 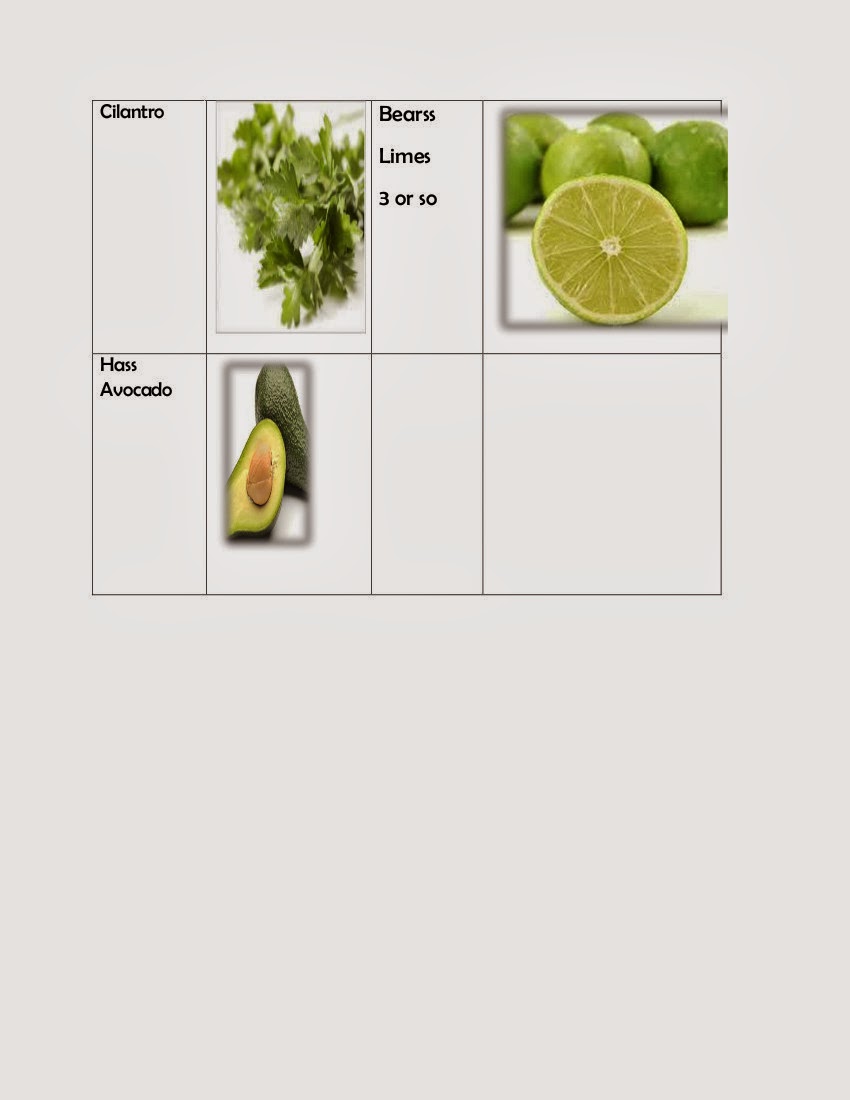