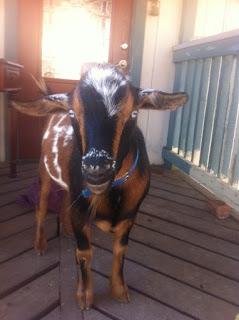 Carl the Menace has outdone himself this week and has exceeded even his usual level of nonsense and bedlam he provides us for our enjoyment. As the herd’s official “taster”, he takes the first bite of anything suspect and then the rest of the herd follows after him. I don’t know how he got this job. But there seems to be a herd consensus.  He ate all my Temecula Valley Pipe and Supply invoices this week (really just half of each—but to the IRS, half a goat-eaten invoice is the same as no invoice), saving none for the others. So I guess the flimsy invoice paper stock the invoices are printed on, is extra tasty. As I was unloading my car yesterday, I put my purse down for a second to shift the groceries in my arms and Carl pounced on my purse and bolted. That’s it, down the driveway with change, lipstick and Notes To Self flying in the wind. I cornered him in the goat barn, as he calmly starred me down with a $20 hanging out of his mouth. Here’s the thing.  Like the chomped on invoices, anything less than half is the same as nothing. I know this for a fact; as I’ve brought goat-eaten bills into my bank and that’s the rule. Trying to negotiate, I offered him a branch from his favorite tree. Carl’s eaten all the low hanging branches, so he needs someone’s help to get his favorite tree now, and I thought I had a chance at an exchange. Nope. Realizing that it must be a very special morsel indeed for me to be making such a fuss over it, Carl swallowed.  Not for nothing, son Frankie again remarked that goat barbeque is among the most common protein sources per capita on a world wide basis. I still have the email Frankie angrily sent over a few months ago, with a dozen goatmeat recipes– after Carl broke into the house and spent a morning in my son’s bedroom.
The loss of the twenty bucks pales in comparison to Carl’s latest offering a couple nights ago, however. As many of you who have visited us know, Morning Song is a hillside farm. Except for our row crop areas, there’s little flatland. We travel up and down the roads in little golf carts and when it gets too steep; we park and use footpaths. I used to make a big deal of always parking on flat land or finding a big rock to put behind the back tire every time I stopped. But as I’m shifting water I might stop a dozen times in 15 minutes; going  from one valve to the next, and have gotten a little lazy with the whole parking on flat land /big rock rule.  I parked by the goat barn at near level, and then hiked down the cliff behind the barn, flipping valves. Ones that were off get turned off, and vice versa. Behind The Goat Barn Avocado Grove has one of the most treacherously steep paths; I can’t ever flip lines at night; not even with a flashlight.  Reaching the very bottom, I heard a familiar sound from way up top that dropped my stomach: the “beep, beep, beep” of a golf cart going in reverse. Since it was dusk, no one else was out working; which meant only one thing. The brake release had been knocked off, and my cart was going somewhere without me. I screamed for Lance; but he’s in the barn happily building boxes with his headphones on and singing at the top of his lungs. You are just kidding me!!! I made a wild and absolutely hopeless break to ascend the hillside (while freakishly being serenaded with Lances’ private karaoke) . I made it to the top of the crest just as the cart went over the embankment . Luck, if you want to call it that; provided a large stone that got caught on the undercarriage of the cart and stopped the vehicle from plummeting further.
Carl stood looking on at all the excitement, stolen cookie bag from the cart dangling from his mouth, indiscriminately munching on cookies and packaging. Lance, still plugged into his earphones, still singing, arrived to bottle feed his baby goat, Boo Boo,  and asked why on earth I drove the cart over the embankment like that.  “It’s Carl,” I began….