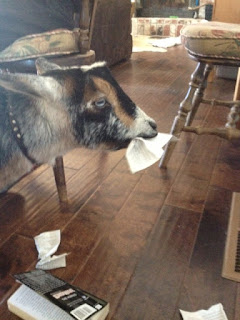 The family-wide debate over the worthiness of owning a goat herd continues, with strong partisan leaders in opposing camps. Frankie, at 18, sees the herd as never-intended-to-be-eaten-meat-on hooves and has zero interest in their finer attributes. He lives in fear of the day one of them jumps on his micro-managed clean-beyond-belief fire engine red Mustang. That would just do him in. Enough so, that if he can’t get opposing counsel to see his point of view, he is up for relocating the herd to somewhere, over there. As in on the other side of the farm. Or the planet. Or perhaps as a reasonable compromise, someone else’s farm. “You could visit, often, mom.” He has, however, finally prevailed in his long held belief that Lance and Boo Boo should conduct their “mommy and me” time, not in our living room. Now in Lance’s defense, Boo Boo is Lance’s little mental health provider, and he likes hanging out with her away from the rest of the herd in peace. Like any mother-daughter relationship, they do need their alone time. And though the internet says it can’t be done, Lance has house trained Boo. That’s not to say she’s house trained like, say a cat. It has been argued that the term “house trained” should be species specific. As in a house trained goat shouldn’t be held to the same standards as a house trained dog. Boo would have eaten the entire Christmas tree if Lance allowed it, dragging her away from it each and every time she entered the living room for the duration of the holidays. He actually suggested throwing our hands up in defeat, and having a Goat Tree this year, just let Boo go to town on the tree and there’d be less to decorate he argued. Really Lance?

On a side note, Carl the Menace did manage to eat the entire Christmas wreath I hung 6 feet up, over the front door. I never saw how he actually managed this….I’m assuming a running start and a body fling toward the wreath perched over the doorframe? Whatever, the wreath was consumed 24 hours after hanging, which pretty much finalized daughter Tessa’s non-partisan position in re the goat issue.

Anyway, Boo’s Christmas Tree nibbling habits, in a certain camp here on the farm, entrenches her firmly in the not house trained category. And then there’s her predilection for prose. Lance has been getting rid of paperbacks he doesn’t want anymore, and Boo Boo is delighted to help in the recycling process. This trait, too; has been pointed out as a character trait that removes the Boo from the house pet category and firmly supplants her in the livestock division. And as the argument goes, livestock shouldn’t be found in the living room, mom. Really mom? We have to discuss this? I don’t know exactly how it happened to me that I found myself debating this, but indeed there has been some debating going on here at Morning Song Farm in re the whole Boo Boo in the living room issue, which is happily now put to rest. Again, we don’t sleep in the barn, and the goats don’t hang out in our living room. We’ve gone over this before, but this time I swear it’s settled.