Okay, I admit I was less than enthusiastic about adding kale to my
baskets. I got so many requests, I thought I’d at least try it.
It looks light Swiss Chard, only tough; I thought. But you have to
try this simple preparation before dismissing kale: Chop up, boil with a little
salt in pan. Drain, chill. That’s right, chill it. Serve as a sidedish with a little goatcheese, crushed walnuts, drizzled olive oil and lime juice. If you tried doing that with Swiss Chard, you’d be disappointed but Kale keeps its shape even after steaming, so lends itself to a sort of
cooked salad. I think the taste is stronger than spinach or Swiss Chard,
but really delicious. 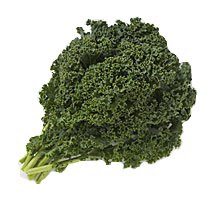 Of course you can serve it hot like you would Swiss chard or Bok Choy, but I think what makes Kale special is that you can eat it cold. I did try eating it raw. Don’t try that. I think Kale is too tough to eat raw. Just my opinion.