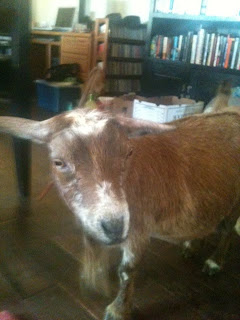 Well, last time I wrote about our goats, I was satisfied with the understanding that I thought we had reached after some discussions. I don’t sleep in the goat barn, and they don’t hang out in my house. Everyone at Morning Song was satisfied with that arrangement and I thought we could move on to more pressing issues. Apparently not. I came home today to discover the entire herd LOCKED in my otherwise unoccupied house. I think it’s Carl AKA Goat Man as pointman. He’s never been much of a rule observer, and I think he has figured out how to open doors with his front hooves. He doesn’t do this in front of humans. I think it’s some kind of goat rule. But the evidence can’t be argued with. Once he entered; and I’m saying he, because I think it’s Goat Man, the whole herd followed. Had he made a quick mission into forbidden territory and exited, I might not have known. But for one reason or another (a breeze? a door tussle? a piece of paper behind the door that everyone went for?) the 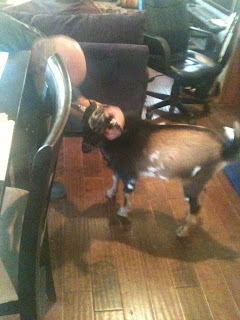 door ended up shut and latched; and the bunch of them were stuck in the house for a couple hours. This is where lines are drawn inside families. Goat lovers vs. boring family members who have no sense of humor or a grasp of the vastly larger picture. Paper dollars set aside for lunch money, a single lousy iphone cord, junk mail and 2 boxes of cherrios can be replaced! Arriving home, I had a surreal moment as I reached for the door and discovered a herd of goats peering out at me from my home. They’d gone straight for the goat treats and knocked over a 30 pound container, then went for random nibbles that they might not find themselves being offered on a regular basis. No vet bill insued, but again, my son re-sent his previous email to me, with a selection of goat recipes.
At left top, Gracie busy munching and left bottom: Lance coaching a phone cord out of Goat Man’s mouth