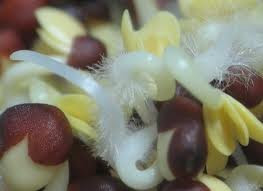 Yes indeed. Although we’ve only had one inquiry, I think it’s worth posting about in case other subscribers were worried and just tossing our sprouts. Lots of people who have tried growing radish sprouts have thought that their radish sprouts had sprouted some weird white mold. See the photo at left. Those hairy white things are actually tiny root hairs, not fungus. After 5 days, the root hairs of each seed combine in a kind of mat. A mat of healthy, white, root hairs; not fungus. Not mold. If we harvest sooner than 5 days, there isn’t enough leafy green to classify the sprout as, well a sprout.
Sproutpeople.com makes this comment in their tech section intended for growers, in response to a complaint by a new grower that her radish sprouts were moldy:
.
“99.9% of you aren’t seeing mold–you are seeing root hairs. If you are browing broccoli, radish, or another brassica or grain, and you see this “fuzz”, just before you rinse that is ROOT HAIRS. Just rinse–and they fall back against the main root. You won’t see them again until your next rinse. Dont’ feel bad–you are the 2,247th person to make this mistake this year :)”
.
From rawfoodtalk.com:
“Radish sprouts have those fuzzy sprout tails…radish seeds are a bit large–they’re very common in mixes, so that’s probably what they are. The little hairs lie down when they’re wet, so look at them before you rinse, and look again right after.”
And from www.lifeandlove.tv/article.cfm/aid/1073:
“The “mold” on my sprout mix was caused by the daikon radish which after about three days start to show microscopic root hairs which typically start to show just before rinsing; when the sprouts are at their driest. These collapse back against the roots with the rinsing process. Many newbie sprouters apparently mistake these roots for mold! Well, at least if I am an idiot, I am not alone.”