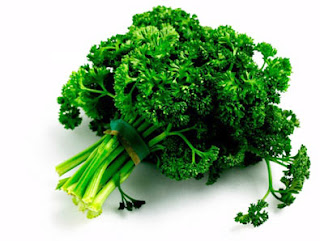 Many of my adventuresome supporters must have rolled their eyes when they saw the parsley in their baskets this week. But wait! Hear me out! I too, remember being told not to eat the Denny’s plate parsley as a child. It wasn’t to be consumed, it was just there to class the plate up a little. The logic escaped me then, and the value of parsley has been in question ever since.

But several people have said how they enjoy cooking with parsley, and the seed catalogs claim it’s easy to grow (true) so I thought we’d enjoy trying it out. Of course numerous thumbs’ down will affect next year’s seed buying forays, so don’t hold back if you hated it.

But first just try this recipe, which is so easy it hardly counts as a recipe. I made 2 cups of a brown rice (no bleached rice in my kitchen which really is a kissing cousin of the zero value Twinkie and Ding Dong). I chopped off the woody stem ends of the entire bunch of parsley and put half in the cuisinart and chopped. Then I did the other half. Don’t do all at once or you end up with parsley pesto, which is a different deal altogether. I then combined the cooked rice, one crushed clove of garlic, )okay the truth is I used 3, but I could live on garlic, so maybe most of you are going to want just one) all the parsley, a little salt to taste and some walnuts. I drizzled a little (maybe 2 teaspoons) of a really good olive oil from Temecula Olive Oil Company and chilled. That’s it. Even if you don’t serve it for dinner, you can keep it in the refrigerator for an amazing, nutritional snack. I prefer it served cold.