That paper towel will suck the moisture out of the leafy green, wilting it quickly, and the paper bag is too porous, and will compound the problem.  I often use simple tupperware type containers, or zip locks, although the best method is to use the Green Storage bags that you see advertised here and there. 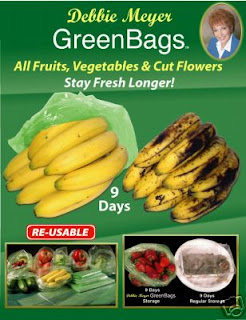 I get mine at the 99 cent store, but I think you can find them on the internet as well, and here’s a link to Bed Bath and Beyond’s offering:
http://www.bedbathandbeyond.com/product.asp?sku=14948821&utm_source=google&utm_medium=cpc&device=c&network=g&matchtype;=&gclid=CLbm8cHbyLYCFRQbnAodjXwA8Q
You can also find them on Ebay:
http://compare.ebay.com/like/221133076095?var=lv&ltyp=AllFixedPriceItemTypes&var=sbar

Also, don’t jam your leafies into anything, give them some space to breathe. And don’t wash leaves before storage.

To answer  questions about organically grown shelf life (vs. conventional)….if a produce item stays “fresh” beyond its normal shelf life, it’s because it’s been sprayed with a chemical to make it so. There are fungicides that will keep fruit looking fresh, but the trade off isn’t worth it. Heck, that’s why our subscribers are choosing to purchase organic produce from us. 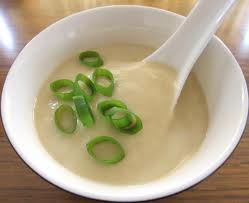 Just the soup to enjoy to celebrate the beginning of the warm months! 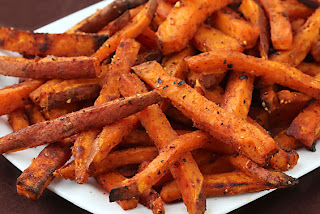 Preheat oven to 350. Peel off the outer skin of each tuber, and then carefully slice into long, thin sections. In a separate bowl, combine a quarter cup of either olive oil or virgin coconut oil with a couple crushed garlic cloves, dash of tabasco sauce, pepper and salt to taste. Dump your cut sweets into your oil mixture, toss, and then scatter on a baking sheet. Bake until tender. Enjoy!

Sweets or Yams? Most of us think that the dryer, lighter fleshed tuber is a sweet potato, while the orange fleshed variety is a yam. But actually, both are sweet potatoes, botanically. This is important to know, because the two; yams vs. sweet potatoes have distinctly different nutritional benefits. The tubers we normally see in the grocery store or farmers markets here in the US are almost always Sweets. Often grocers refer to the light skinned ones as Sweets, and the orange fleshed ones, in the image at left, as yams. True yams are grown in Africa as a staple, and are rarely seen in grocery stores domestically. (For comparison, see the image above of the African yam. The true yam is rough skinned, and can grow to an astounding 150 pounds. Sweets are smooth skinned and certainly aren’t known for rivaling livestock in weigh-ins. All Sweets, whether light fleshed or orange fleshed, are morning glory relatives. Though different in colors, the sweets share similar nutritional value and health benefits because they are all genetically similar. Though shockingly low-calorie considering their filling attributes, the sweet potato has a reputation among health food lovers as being among the most densely nutritious veggie available.

Sweet potatoes are packed with vitamin A; one medium sized tuber has nearly eight times an adult’s needs. Additionally, the sweet contains considerable amounts of anti-inflammatory compounds which can be very important to people with IBS, arthritis, gout and other inflammation-related diseases and the tuber also has a very low glycemic index which is thought to be a benefit for those dealing with diabetes.

If they weren’t so darn good, maybe we could see not adding them to our diets on a regular basis, but happily, these gems are quite tasty, and deserve to be grown and served more frequently than during the winter holidays!

This is so quick and easy, smooth and delicious, it may become a favorite quick breakfast meal! 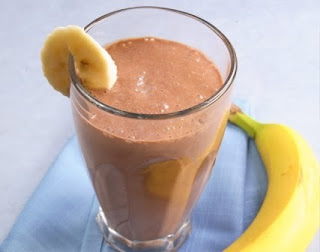 2 medium cooked yams (I throw them in the oven when I’m cooking something else, and then have them at the ready when I want to use them for this or another quick recipe. They can also be easily microwaved)
3 cups vanilla yogurt
1 cup milk
2 cups crushed ice
1 teaspoon honey
1/4 teaspoon nutmeg
1/4 teaspoon cinammon
1 ripe banana 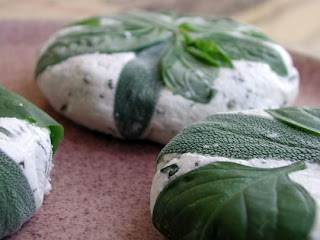 Come on out to Morning Song Farm’s beginning cheese making class! Come visit the farm that feeds you and learn something new! We’ll focus April 20th’s class on a few of the fun and easy cheeses that will easily turn you into a cheese maker! Impress your friends with cheesy gifts and try out a fun and different hobby that brings dividends of appreciation. You may find that you’ll discover a passion for cheese as we have here at Morning Song Farm. It’s easier than you’d ever think!
Follow along with handouts and easy to follow recipes so that your success is insured when you repeat the steps at home. We’ll talk about which milk to use, cultures, and why certified organic milk isn’t always your best choice. We’ll make two or three different cheeses; Garlic Ricotta, Herbed Queso Fresca, Fromage Blanc, Paneer, Feta and Neufchatel cream cheese are among those we choose to make and sample during the class.
Class starts at 9:00. Arrive 15 minutes early if you’d like, to sample herbed cheeses as well as our just churned butter and freshly milled-macadamia muffins. Warm up with hot coffee or tea while meeting your fellow cheese loving adventurers! Get a chance to meet the farm’s beautiful Nigerian dairy goats, and pet our yearlings and adults. Bring a crunchy granola bar or two and you’ll be everyone’s best friend, especially Carl The Herd Leader who eats anything but really gets excited if it’s crunchy.
Tuition: $65 per class per person. Payment and reservations can be made by a quick email here: csa@morningsongfarm.com, if you have a CSA account with Morning Song Farm, or make your reservation and payment here on Meetup if you are not a CSA member. Please, no impromteau arrivals. The class size is limited for a reason, so we need to have firm reservations. Our barn is now heated, but do come with a sweater just in case. The pathway to the barn is rough and unpaved, so stash the stilettos or dress shoes; and opt for sneakers or boots for your cheese making day.
0

This is a great recipe to introduce yourself to the pleasures of both cooked kumquats (which, incidentally will fill your kitchen with the other-worldly aroma of simmering kumquats) and sauteed, freshly harvested young fennel leaf. Combined, they make a lovely stir fry with a little wilted spinach over a nice basmati rice.

To do: I cut a handful of kumquats longwise, and flicked out the seeds. Toss kumquats in the smallest pan you have, add water and a quarter cup of honey. If you have honey on the shelf that has crystalized, here’s a good use for it. I cook down the kumquats until the liquid has thickened somewhat. Leave the pan uncovered, and as the liquid reduces; you’ll enjoy a little “aroma therapy”:)

I sliced the tender stems and leafy green of the fennel and sauteed with a bit of butter until the fennel leaf is tender, and then set aside. This doesn’t take long, the fennel today is VERY young and tender.

I steamed my Basmati in a rice cooker, and then let sit until needed. Add a handful of your baby spinach if you like to your fennel, turn heat back on if you choose to add spinach, and saute until the spinach is wilted, no more than a minute.  Finally, wisk the three pans together; kumquats, fennel and rice add salt to taste; serve immediately or chill and serve as a rice salad.