As we have been adding more and more row crop to our little farm, it was suggested we fire up the old Kabota tractor to so some of the heavy work. Son in law Duane, a professional rancher for many years, came down from Sacramento this week and took the time to give me his opinion. Could the Kabota be repaired, or should it remain a “lawn ornament?” It’s a pretty cruddy looking thing; you have to stick a knife in the ignition to get it to turn over, and it needs $1,000 worth of tires all around. There’s not much remaining of the seat and the paint is so faded it looks like it belongs in the trash heap. It’s missing part of the starter mechanism and a valve. He added up all the parts we need to get it running again, and it definately makes sense to repair. That’s great news. Daughter Tessa says the most important thing is new paint.

Plenty of the ususual stuff, but I want to mention a couple new things this week. There’s a strange looking lemon that has a little cap on the top. That’s the Pakastani Sweet Lemon. I use its zest; the juice isn’t really sweet, and it’s juice isn’t really sour. It’s the skin that’s to die for. Use a potato peeler and shave off every bit of the outer layer of skin. Chop and use in a number of different recipes. I like to add to my sugar cookies, imparting a scented geranium note that is very unusual. I also add to a basic olive oil and lime juice salad dressing. Or make a limeaide with the juice limes in this week’s basket, and then add the juice and very finely shopped zest of the Sweet Lemon.

There’s a bunch of young garlic greens that looks something like the green onions (also in this week’s basket). Use it chopped in stir fries, raw salads, soups, etc. to impart a gentle garlic flavor and aroma.

There’s a large head of Kale in each basket; use as you would Swiss Chard. And there’s a small bunch of Arugula. The last of the Moro Blood Oranges and Mandarins. 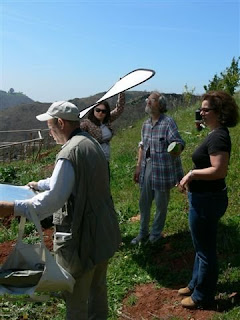 We’ve planted all the new trees we purchased, and are now finishing up the new blackberries and the low-chill raspberries. Also we’re planting rhubarb and more asparagus. We haven’t had much luck with rhubarb and asparagus; it may not be cold enough in Rainbow, but I’m still trying. David Karp, well-known fruit writer came for a visit this week with his author friend, Stephen Facciola and Puerto Rican mangosteen grower Ian Crown. Some of you may have read Stephen’s Sourcebook, Cornucopia II, A Source Book for Edible Plants. It’s an incredible compilation of edible plants and their seed sources. He was kind enough to sign a copy for me! Many of the things that Ian grows in Puerto Rico I grow as well; although I have no chance of growing anything tropical, which Ian specializes in. We enjoyed comparing notes on the things we grow in common.
As we walked through the farm, David was able to help me identify a few fruit trees whose labels have eluded me. We have 3 or 4 citrus trees that are “rootstock”, which is a disappointment as rootstock fruit is useless. I also have a tropical apricot tree, (dovyalis) which has never fruited. I’ve tasted the dovyalis and it is truely amazing. I’d forgotten I’d purchased and planted it 7 or 8 years ago. Long time to wait for fruit….
They gave me a fig tree, which David knows I have a fondness for. David says this Violette is unusually delicious. I’ll let my subscribers decide! I have root grafted many of my own figs on the farm.
He also confirmed that the weird looking fruit that wasn’t picked soon enough is the Yuzu, better picked in the fall. David was most interested in the Ethrog trees that have just been removed from my farm. We had been growing Ethrogs, a sacred Jewish fruit, for a couple of rabbis. They have decided to move their trees elsewhere, but David, who is writing a book about Ethrogs, wanted to visit and discuss my experience and see what was left of the grove.

Juice Lime Meringue Pie
Prepare a baked pie shell. For simplicity’s sake, I use Trader Joe’s ready-made. It doesn’t have any preservatives or chemicals and tastes the same as the ones I make myself. The following recipe makes a pretty tart pie. If you like your dessert a little sweeter, add more sugar.

Meringue:
Whip egg whites until frothy, add 4 tablespoons of sugar and ½ teaspoon of vanilla with ¼ teaspoon of cream of tartar. Beat until peaks will stand up and lean over only slightly. Do not over beat.

Spatula meringue over pie top, bouncing spatula over surface of pie to create pretty peaks. Place in oven at 350 until golden brown.

Sorry to have to announce a small price increase this coming quarter of $2 per basket. Although operating costs have gone up a little in most areas, (wage, feed, fertilizer) fuel and delivery costs have doubled in the last year. Today, 3/17/08, diesel is 4.25 a gallon, with media commentary that higher prices should be expected soon. Effective for baskets delivered after April, 2008, small baskets will be 34.50, and large 44.50. I understand some of our fabulous supporters have to really budget thier food bills to participate, and apologize for the increase.

We’re going to dig our oldest potato planting of heirloom potatoes for next week’s basket, and we’re hoping to add radish sprouts from our sprouting system by next week, or week following.

All our new trees are finally in and many are happily flowering!

Farmer Donna continues to slog through the red tape of getting the recently dug well operational. SDGE won’t put in the power pole until the County of San Diego issues an electrical permit. It’s a 2 hour round trip to Kearny Mesa in San Diego to the County Planning Department for unincorporated areas of San Diego. After waiting in line for a ticket to wait in the real line, our assigned planner snorted at the plot plan presented and sent me on my way with a 12 point list of requirements and an admonishment I should learn how to use an engineer’s ruler. Ouch. The document I’d pulled off the internet said I’d need a “plot plan.” I wasn’t sure what I was supposed to be “plotting”, and you sure can’t call and ask. You have a question? You have to drive down there and wait in line. Returning a week later, I again waited in line at the kiosh to wait in the real line. This time, unfortunately, the clerk was labeled: “trainee.” She sent me, (electronically) to the wrong line, and after waiting an hour I was called into a planner’s cubby to be told I’d need to start over. Started over at the kiosh, and you won’t believe this, trainee girl sent me to another wrong cubby, which was discovered after another long wait. I sat down, now on try three, with no apolgies, but a comment that I was surely in the right electronic que NOW and realized I was an idiot if I thought I was in the right line now and got up and insisted on speaking to someone in authority. I finally got called to the right planner, and he kept getting interrupted. He was happy with my new, improved, plot plan. Which surely did not include where the new apricots are planted. On the first plot plan I did, lacking any buildings or improvements on that parcel, I drew in the farm’s planting guide, thinking that was better than nothing. Wrong, there. Twenty minutes before I would have had the permit in my hand I was forced to leave and start over on another day because I had to leave to pick up my kids. This is farming? Now you know why architechs and engineeers get the big bucks. They are totally able to wade through City Planning bureacracies without losing their tempers, serenity or car keys, a rare genetic character trait.

As I sat waiting the first time around, a nice couple befriended me. Fire victims, the wife told me she had gone postal a month earlier here. I noticed they got right in to the correct planner and were cheerfully gone before I even knew I was in the first wrong line.

As much as I love winter vegetables, I sure am ready for something new! In the greenhouse are a beautiful array of heirloom tomatoes: Sun Golds, Romanian, the ever popular Brandywine, Pruden’s Purple, Moskvich, Rosalita, and more. Also some nice heirloom eggplants: Black Beauty which is said to have a poor yield, but I love the fruit of this plant and haven’t found a yield problem myself; of course the heirloom Listada de Gandia from France we grow every year and we’re trialing Galine.

You’ll notice this week the baby red-leafed romaine lettuce which is really tender and flavorful. We were having trouble getting it to germinate in the cold, but now we hope to be consistent with it each week.

In the greenhouse are plenty of peppers, mostly heirlooms. We have the Chocolate Beauty, the Red Knight, Kung Pao, and the Jalapeno.

We just put in our first planting of greenbeans; I think we’re a couple weeks early on that, but the risk is worth it. If we get hit with a late frost we’ll have to replant.

Lester Ip, charter member from the Costa Mesa gang has kindly pointed out a broc issue that seems to come and go. Aphids love our broccoli almost as much as we do! Herein lies the downside of organic production. Without the pesticides to whack down the bug population, it seems like every aphid in town occassionally drops by the living salad bar at Morning Song to stake a claim. I could say wash, wash, wash. But I’ve noticed with brocolli, that washing isn’t enough. Those darn aphids cling happily to their little brocolli world and have no intention of moving on. Here’s what I’ve discovered to be helpful if you’re not planning on eating it raw: get a pan of water going to a nice boil, drop in your washed brocolli for 60 seconds. Remove and rinse. Aphids are much more easily rinsed off at this point.